The Church of Rock and Roll

March 03, 2017
Last night, I saw Green Day live at the County Coliseum. It's the second time I've seen the band. The first time, was in the early 2000's when they toured with Blink-182, and I was too you to know all the small things really wasn't going to matter.

When we got there, the place was already packed and the super fan music-heads were sprinkled in with their newer fans who sported updated 2017 grunge wear. I pointed to D and laughed. Flannel and El Paso didn't work in 90's and climate change hasn't made it any friendlier.

I really didn't know what to expect from the band, though. When I tried to think back to that first concert, I didn't really remember it much. Now, I've gone to a fair amount of shows in my life, so they do start to run together, but I usually remember at least one thing, but with the 2002 show, well, I really couldn't, which in retrospect was maybe a good thing. I was going in with a clean slate.

Thirty minutes in, after the crowd cheering to things like " No racism. No homophobia. No sexism. No fucking walls," the energy was reaching peak levels. Green Day's mission, and they said it several times throughout the show, was to make us feel joy.

It's a really simple word, but not one we use often. I can't remember the last time I said it or wrote or felt it. That's odd, isn't it? I feel happy, a lot of the time. Content. Happy. Upset. Sad. But, joy? When he first asked us to show him joy, we all screamed and cheered at the top of our lungs, but even as I did it, I just felt like I was screaming. I wasn't feeling joy. I was trying to be loud. Billie Joe crinkled his nose and nodded unconvinced. I didn't know where it was going, but Longview was coming up, so I quickly forgot.

Fast forward thirty more steamy minutes and Tre Cool did leg kicks a la Vegas showgirl while singing Jame Brown's "Shout." We all sang along, and when Billie Joe and Tre switched places and they got us to all sing "a little bit softer now" Billie Joe withered on the stage and said,

"Rock and roll is going to set us free."

Then we sang along to him to Rolling Stones, "Satisfaction."

"This is unity," he said while we sang.

And it was. I looked around for a moment and saw all the raised hands and the voices singing as loud as they could, and I saw it.

The kind I've never understood that people get by going to places like church. Even as I saw the word church, I wrinkle my nose. I find organized religion odd and stifling. And when I've seen that weird kind of elation on TV, it's never quite made sense to me. But last night, in the damp, dank seats of the Coliseum, a sea of people felt joy as they sang along to their favorite songs with arms raised and voices going hoarse. That's when he smiled.

And it was. And it was rock and roll that took us there. And it was freeing and wonderful not thinking about anything other than that music, singing that word, moving my body to the music.

Today, my throat is a little raw, but the feeling remains. It lingers in my mouth like the last taste of something delicious. 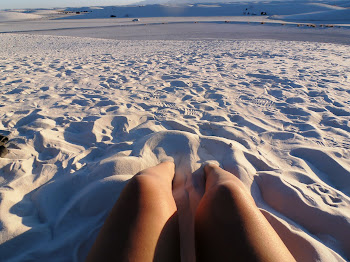